Solid Job Right out of Highschool: Great Opportunity Without a Degree

Next
Solid Job Right out of Highschool: Great Opportunity Without a Degree

It used to be in previous generations that if you weren’t going to college right after high school, you did something wrong. Today, however, that isn’t the case. With the current state of low unemployment and a strong economy despite COVID-19, it’s easy to see why more young adults turn to the workforce right after high school.

According to npr.org, college enrollment has been steadily declining over the past decade and appears to continue that trend in the future. 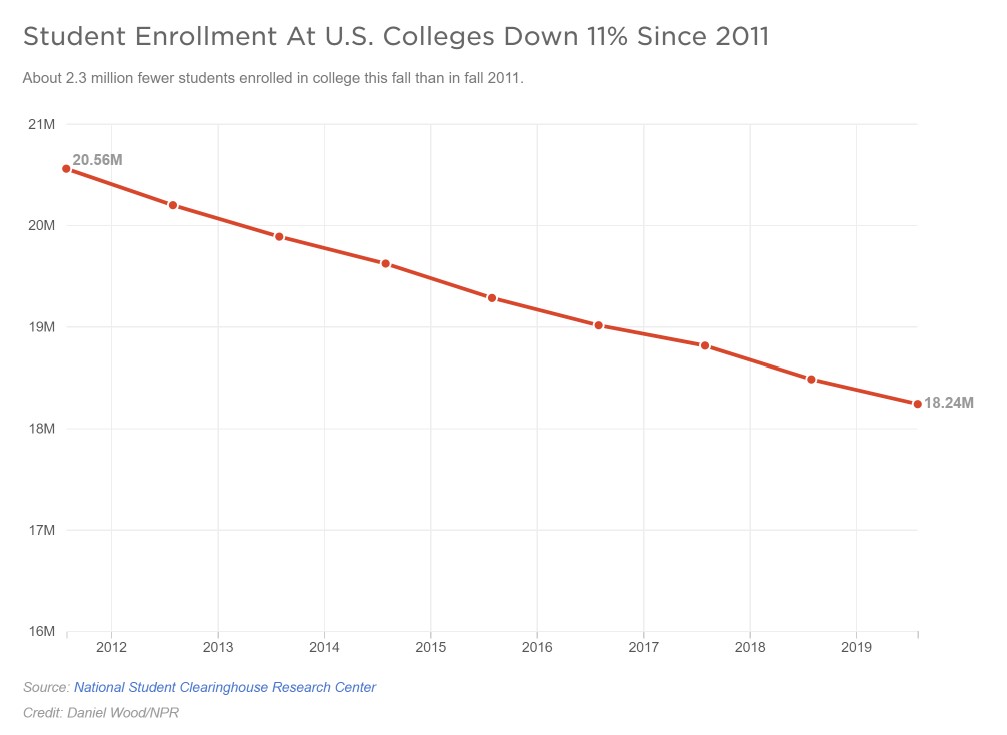 Though a college degree is certainly an accomplishment and can lead to a strong career, it is not the only path to a productive job today. In fact, the gap in starting pay for recent college graduates and those with a high school diploma is closer than you think.

According to shrm.org, “The average starting salary for Class of 2018 grads increased less than 1 percent from the overall average of $50,516 posted for the Class of 2017, indicating the sluggish growth in salaries for new college graduates in recent years, NACE reported. The overall average starting salary for new college graduates is up just 1.4 percent from the Class of 2015’s average of $50,219.” [2] This is based on obtaining a bachelor’s degree, which typically takes 4 years to complete. $50,000 is certainly a respectable income but comes at the cost of around $30,000 of debt on average. [3] Compare this to the mean income of an employee with a high school diploma – “Those with a high school diploma have a higher earning potential. The average weekly earnings for these with a high school diploma is around $712. This is an annual income of $37,024. The unemployment rate for these individuals is 4.6%” [4] This is a difference of roughly $13,000 in yearly income, which seems nice on paper. However, this does not consider the biggest advantage of joining the workforce right out of highschool: Time.

Time: The Most Valuable Resource

When a person graduates high school, they are typically looking at a future that branches down two distinct paths. Option A involves attending college for typically 4 years, accruing $30,000 in debt, and starting their career around age 22 (assuming that you graduate in 4 years). Option B entails working right out of high school and building income on day one. So let’s compare what the future for these two timelines looks like. To keep this simple, we won’t include any raises for either job position and base it off the average starting salary for each option. At the end of your college career in option A, let’s assume you secure a job position with a salary of $50,000 per year and have a starting debt of $30,000. At that same point in time in option B, you would have already accumulated roughly $150,000. So at age 22, you would either be plus $150,000 or minus $30,000, depending on which path you’ve chosen.

The question you’re probably asking yourself now is how long it would take to start seeing the benefits of going to college? The answer is roughly 12 to 15 years based on the numbers given above. This also doesn’t take into account that additional years of work experience could land you in a seniority position at an earlier rate in option B as well. Though this comparison does not take into account all variables and is solely based on averages, it is an important comparison to be made in the perspective that you could be waiting until you were 36 years old to be reaping positive benefits from getting a college education compared to working right after high school.

Being armed with this information, let’s say you decide to pursue a career that doesn’t require a degree; what are your options? First, it is important to consider your interests when choosing a career path. Money is not always the key to happiness; job ownership and a general feeling of fulfillment that you get from a career go a long way as well. For example, aside from fantastic pay, many benefits accompany a fulfilling career in road construction.

Benefits of Being in Road Construction

There’s a saying in our industry known as “death to cubicles”, and we aren’t the only ones who feel that way. There’s been a big push among the youth in recent years to pursue active careers outside. In fact, Forbes wrote an in-depth article backed by data that supports major benefits in working outside, one of which is “Increased Happiness. Many studies show that our moods take a positive shift when we spend time outside.” [5] This, coupled with the general shift away from your typical office position, supports a job that often takes you to different locations throughout your work season.

We spend a good chunk of our lives working, which makes having a good relationship with the people you work with crucial. Working in a hands-on job in the highway construction industry often means being a part of a crew and reinforcing teamwork and the dependency on getting the job done right collectively. Haley, one of our flaggers, said it best with a sentiment that I have heard from many of our employees – “I do love all of my co-workers, they’re all so friendly and funny, and that’s probably one of my favorite things – I love the people I work with.” [6] A resounding theme that I’ve received from interviewing several of the employees at The Gerken Companies is that it feels like family. The mutual respect that comes with a team-oriented job makes the level of camaraderie second to none.

Nevertheless, income is still significant and should not take a backseat when considering a career path. In road construction, the average income is a substantial benefit compared with other job positions. According to the US Bureau of labor statistics, the mean annual wage for highway maintenance workers is $42,410. This beats the average annual wage of people with a high school diploma by over $5,000. [7] On top of that, road construction is and will be a necessary industry almost indefinitely, adding to the potential for growth and overall job security.

Overall, attending college can be a great experience that builds a solid career, but is no longer a requirement for a fulfilling job in our day and age. If you like being outside, working at various locations, being a team-player, and making a high income, all right out of high school, road construction could be a rewarding career for you!

About the Author: Alan Bostelman